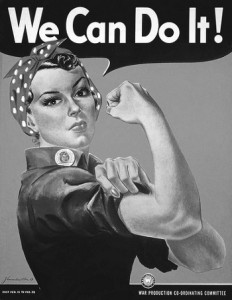 The 1940s – Franklin D. Roosevelt was the president and the Great Depression was still hanging on. Thanks to some power-hungry dictators around the world who had ideas of world domination and the extermination of some populations, the United States went to war. Life on the home front changed rapidly. Think about Rosie the Riveter, female airline pilots and rationing. Who says that the kitchen styles of that time had to reflect gloom and doom? Think again!

History of the 1940s Kitchen

WWII defined the 40’s, the people who lived during that time period – and kitchens in American homes. Despite all the shortages of materials, homeowners of that era still managed to find a way to create a well put-together kitchen, full of color, sunlight and texture.

The war in Europe and Japan weren’t the only factors that defined American kitchens. The glamour of Hollywood, its movie sets and stars was reflected in kitchen styles all across the country – despite the shortages caused by the war.

When implementing 1940’s style in your kitchen, keep the following in mind:

Because women were working outside the home in ever-greater numbers, kitchen appliances became functional rather than frilly. The appliances were usually enameled in white, although primary colors were also popular. If you like a little color, make your kitchen pop with two bright primary colors, like yellow, red or blue. Fun fact: Green paint was reserved for the military, making it unavailable for civilian homeowners.

Remember, back in that time, people were seeking cleanliness because of the scourge of polio. To them, white represented sanitation, especially in the kitchen.

Think old-fashioned linoleum. Forget ceramic tile and wall-to-wall carpeting. Because the woman of the home was likely to be working to aid the war effort, she needed to be able to quickly mop and wax the floor while she was at home. Seek out genuine linoleum flooring for your 1940s-style kitchen.

Think brightly colored chairs, wood tables and rotary phones. Lay your hands on one just for decoration. Find a cabinet radio with the large dial in the center and set that on one end of your new kitchen. Add colorful linens, a bright gingham tablecloth and an enameled bread box for your kitchen.