When to Choose a Peninsula Over an Island in Your Kitchen 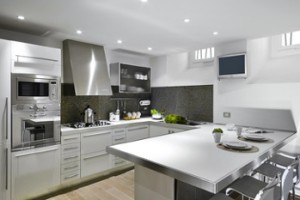 Everyone today wants to have an island in their kitchen – it’s all the rage – but many kitchens don’t have room for them. Therefore, homeowners either squeeze an island in – a common remodeling mistake – or leave them out altogether. There’s another option, though – one that is not often considered, but may be a better decision than an island in the first place; the peninsula.

Functionality of a Peninsula vs. an Island

The main benefits of an island in the kitchen are extra storage space, extra counter space, and, sometimes, extra seating space. Some islands even add second sinks or additional under-counter appliances like wine coolers; but all of this functionality can usually be accomplished with a peninsula as well.

When considering an island, you must account for ample passage space on all sides of the island. That means you need at least 36 inches of space between the island and any other counter or wall on all four sides. Now, imagine sliding the island against the other cabinets, or against a wall. That leaves you with only one side that needs 3 feet of clearance allowing for more total countertop space and storage – which is essentially what a peninsula does.

Some other aspects that can come with a well-designed peninsula are:

A peninsula in the right place can really improve a kitchen space and is often a better option than an island – especially in a small kitchen. If space is going to limit your island to a sliver consider making it a peninsula to gain more of the benefits you desired to begin with.

Looking to update your cabinets?  Make sure you’re up to speed with the vocabulary with the free guide: