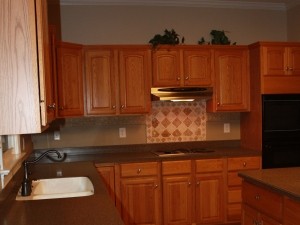 Three years ago, my husband and I bought a 13 year old home.  With a Bachelors in Fine Arts and 8 years experience designing kitchens, I am blessed (and cursed) with the ability to see a kitchen for its potential.  The blessing for my husband was that he knew before we signed the closing papers that we were going to remodel the kitchen within the first three years (I thought I was being generous!).  The curse for him is that the first three years passed VERY quickly!  So I decided to approach my own kitchen remodeling project by following the same advice I had often given my clients, and which you can find in our Getting Started on Your New Kitchen or Bath Project article.

So here’s what I did

I began planning my kitchen design well before the project was even seriously discussed.  I think you’d be hard pressed to find a kitchen designer who hasn’t played with their own personal kitchen layout at one time or another!  I realized that I couldn’t change too much about my kitchen layout.  My two story house was built on a slab, so it was going to be best for my major utilities (fridge, cooking area & sink) to stay where they were.  Sure, I’ve always wanted a larger island and slightly wider aisles, but I also had to accept my limitations – No, you can’t move a load bearing wall.  The kitchen layout did function fairly well, so I just had to embrace that fact (sigh) and make it better.

Every major project is going to come with its share of tradeoffs, and my kitchen remodel was no exception.  Although my kitchen had a decent amount of counter space, I found that the microwave and oven built into an oven cabinet forced the whole family to bunch up in the same corner of the kitchen every morning to make breakfast.  My desire for additional counter space made opting for a new freestanding range a “no-brainer.”  Reclaiming the counter space would allow me to improve functionality and traffic flow by rearranging the work zones within the kitchen.  Tradeoff number one was to keep our existing fridge and dishwasher to reduce expenses.

I was extremely fortunate to be able to purchase some cabinets that weren’t originally designed or ordered for my kitchen (but happened to fit almost perfectly).  But this good fortune led to tradeoff number two – I had to work with what I had.  My husband, who knows me all too well, was concerned about this.  Sure, we were getting some really nice cabinets at a huge discount, but he was afraid that I would want to remodel the kitchen again in another few years.  This is a very legitimate concern and something you should think about for your own project.  A kitchen remodel is a big deal and has many big decisions!  Don’t compromise on something unless you’re absolutely sure you won’t regret it.  In my situation, the door style, species and color of the available cabinets were actually a combination I would have picked, even without the discount.  So the discounted cabinets weren’t so much a tradeoff as a big bonus!

My third tradeoff actually takes us back to the appliances.  The house originally had an electric cooktop and I wanted to bring in a gas range.  The slab foundation put a huge damper in the flow of the project because the gas company was going to have to dig a trench from the meter at the opposite side of the house all the way through the backyard to the exterior wall at the kitchen.  A noisy machine and two hard working guys made sure I had the gas line for my new range… at the expense of the sprinkler system.  We knew this was going to be a risk… but it was a risk we were willing to take since our sprinkler system was out-dated (something was always breaking) and our near-future landscape plans would require a different sprinkler layout anyway.  I had to seriously think about this before purchasing a gas range.  The compromise of staying with an electric range, even a new high-tech one, was a compromise that I was not willing to make.  A gas cooking surface was the whole motivation for the kitchen remodel in the first place!

Keep in mind that even professional designers, at least those working within a budget, don’t get everything they want in their own personal kitchen remodel.  Make sure you know what’s most important in your new kitchen and be prepared for a few tradeoffs.