Countertops hold a unique position in the kitchen remodeling realm.  In some cases, they are the sole remodeling activity, representing a relatively easy and inexpensive way to give a fresh look to an otherwise functional kitchen.  Of course, they are often part of a more extensive remodeling project where the cabinets are replaced.

Consumers shopping for new countertops often have a good idea of their material choice and possibly even color, but quickly become confused when their designer begins talking about edge profiles.  This confusion can and often does lead to quick, poorly thought out decisions which ultimately have a big impact on the finished project.  Knowing some of the terminology and the choices you will be faced with can help ease the confusion and take away a big source of frustration in many remodels.

Edge treatments are generally created with a material buildup (doubling the thickness of the countertop material) at the working edge of the countertop. This thickened edge can then be tooled (profiled) into an almost infinite number of shapes.  In this article, we will look at the six most common edge profiles, which with only minor variations translate universally across all popular countertop materials.  It is important to remember that more intricate edge profiles will often result in higher countertop prices.  In some cases, these upcharges can be significant!

As the name implies, this is a basic 90 degree edge.  With a laminate countertop, the front edge is typically “built-up” to 1 ½” in height with an additional strip of particle board.  A matching laminate strip is glued to the surface and the resulting 90 degree is then polished smooth.  With engineered solid surface and natural granite, the edge is simply polished smooth and square.

A waterfall, or 1 ½” flat-rolled edge, will receive a ½” radius shape to the top of the edge only to give the edge a pronounced rounded look. This edge tends to “soften” the look of the kitchen and give it a more “finished” look.  It is also easier on your elbows!

A beveled edge is actually a hybrid of the square and waterfall edges, with an edge that is less sharp than a square edge, but obviously more angular than a waterfall.  The edge is cut so as to have an additional angle edge, usually at about 45 degrees and between 5/16 and 3/8” wide. 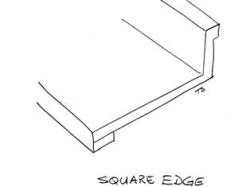 A bullnose edge is made by applying a ¾” radius to both the top and bottom of a standard 1-1/2” thick countertop edge.  This edge treatment will look very similar to a waterfall edge if looking top-down, but will show the lower radius when viewed head-on.

No, the Euro Edge is not a football (soccer, in the U.S.) team.  Actually, this edge treatment is very similar to a Bullnose with a flattened face which gives a softened square look to the edge. The Euro edge will typically have a 3/8-1/2” radius on both the top and bottom of the counter edge.

An Ogee edge is a very distinctive edge treatment which is a combination of a radius on the top of the edge, a reverse (or concave) radius in the middle, and a bottom radius which matches the top one. The overall effect is an “S” shaped profile top to bottom. This will typically produce a 1-3/8” thick edge overall. 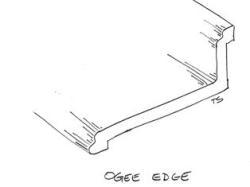