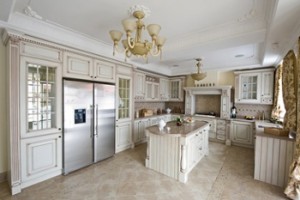 The year is almost over and it’s time to take out the score cards and see which trends have stuck it out in 2012. This year, we noticed consumers changing their tastes, moving towards a mixture of old-school traditional and sleek modern looks. Here’s are some of the top trends we’ve seen in 2012.

With homeowners less likely to move out of their house or add on an addition in this economy, the illusion of space is something everyone wants. Integrating appliances into the cabinetry has become a new way to solve the dilemma. Having storage and appliances blend in with cabinetry creates the illusion of a larger area in your home and provides exceptional utilization of space in a kitchen.

Incorporating glass into your kitchen

The old trend used to be tiles and stone but this year we saw that glass made a splash. Glass allows for color infusion into the kitchen without overwhelming a homeowner. It was noted this year that more than half (52 percent) of kitchen designers used glass in their designs. This is an increase from the recorded 41 percent of designers using glass last year. Glass provides a light reflective surface that will create a feeling of openness in the kitchen.

Moving away from cherry wood cabinets and wholly traditional designs, this year’s trend is to create a sleek and welcoming environment. By combining the traditional and modern designs, kitchens have a cleaner look with a warm and traditional touch. This trend also lends itself to the solid surface trend that is popping up in many kitchens now. A solid countertop adds to the sleek lines of a modern space.

White surfaces have come and gone in kitchen trends but this year, they came back in a new way. Reinventing the all-white kitchen, designers have changed their approach to the clean look. Now, trends show that white countertops and darker finishes on wood are a popular choice. As far as painted cabinets go, light neutral colorsare still the choice among consumers, with a large number of designers reporting that they are using white. Another neutral that is noted as a trend maker this year was gray. Using gray in a kitchen creates a calming effect so other louder finishes and colors can really pop.

It looks like it was a year full of simplistic designs creating timeless spaces, and the score card reads a win for these designs with concealed appliances, glass finishes, transitional style and neutral color schemes. What will come in 2013?