What to Look for in 2013 Kitchen and Bath Trends 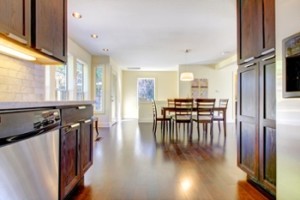 Every so often we like to update you on where the trends are moving and what is becoming popular in kitchen and bath remodeling. In our last post about kitchen trends in 2012, we saw that transitional kitchen design and neutral colors were leading the way. Since it’s the end of the year and many of you are planning a remodel for 2013, we thought it would be helpful to put together some of the new trends we can expect to see in the coming year.

It seems like 2012 flew by, doesn’t it? What we can say from the last year is that people are still remodeling and still looking to be ahead of the next trend. After neutrals and transitional spaces have taken over, we’ve found some new ideas that have come down the pipeline:

Soft Contemporary – A simpler approach of the modern kitchen, a soft contemporary design doesn’t have as many harsh lines, but more soft accents throughout the space. This look can be achieved through modern accents in a more traditional space such as contemporary bar stools or lighting.

Eclectic – This design trend is less of one style as it is a mixture of many. We see a lot of spaces putting together different finishes, patterns and textures to create a space that is truly one of a kind.

Trends in fixtures change often and the choices you have are plentiful, so it’s hard to know where they will go next. We’ve done some research and can see that a few things are going to be new in 2013.

Inspired by nature – The tranquil peace that is brought by nature is something that people are trying to recreate in their personal spaces. A soothing space is something we all need, and a nature inspired area is a great way to do that. With wood tones and stone you can create a tranquil space of your own.

Modern Finishes – Keeping with the modern trends in the kitchen, bathrooms are seeing modern finishes as well. Darker colors, cleaner lines and polished metals will all be making an appearance in 2013.

Eco-Friendly – Using less water is something everyone is talking about. This coming year we will see plenty ofeco-friendly fixtures for the bathroom that will be low-flow or water saving. You can be confident that the design of these pieces will be nothing less of spectacular as well.

There are plenty of things that are going to be new in 2013 and kitchen and bath trends are one of them. Modern lines with classic touches, inspiration from nature and being eco-friendly will be trends that will stand the test of time.